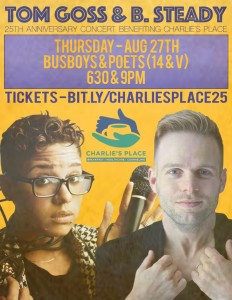 Two D.C. musicians are set to perform at a concert to raise money for a local charity organization.

The concert will benefit Charlie’s Place, a local organization that provides people in need with employment and housing placement services, nursing, HIV/AIDS testing, counseling and other crucial services.

Charlie’s Place Program Manager Matt Lang says he is hoping to raise $20,000 from the concert in order to provide free meals into 2016.

Since opening in 1990, the organization has provided more than 300,000 meals to people living in and around Adams Morgan, Dupont Circle and Columbia Heights.

Advanced tickets are available online and start from $20. Tickets on the door will be $25.

Click on the collage to see more photos of the interior: Tropicalia will open at 14th and U NW, one of DC’s legendary corners. (Luis Gomez Photos)

By Alejandra Owens. You can find Owens at her food blog, One Bite At A Time. Owens also writes for City Eats DC, a Food Network site, where you can book dinner reservations. Follow her on Twitter at @frijolita. Luis Gomez also contributed to this piece. Catch Gomez’s photos at One Photograph A Day. Follow him on Twitter @LuisGomezPhotos.

Nooooo. Repeat after me: No

When we sat down with JD Quioco of Tropicalia to discuss the new place, my first question was about the name. Dubbed “Tropicalia,” the basement space located below Lost Society and Subway at 14th and U is set to transform into a “global dance hall” at one of DC’s legendary intersections with an opening date of “very soon.”

“I don’t want to use the word ‘nightclub’ or ‘venue.’ You want to get the feeling you get from watching Buena Vista Social Club, and we want it to be a place where friends can gather for good drinks, some dancing and a fun night. In other words, a neighborhood place,” said Quioco.

The Dance Hall and Design

Tropicalia brought together a team with the best talent they could find — artists designers, and architect and sound people. Clocking in at 3,500 square feet with a capacity for 200 dancing people, Tropicalia has the potential for becoming DC’s next great dance hall. The music will come from a mixture of live musicians and DJs.

The DJ booth is mobile and can be moved to different locations on the dance floor depending on the night. The bar is a glowing one. Made out of white plexiglass and steel, it has thousands of programmable LED lights inside it that can be programmed depending on the music or the mood of the moment.

A menu of Caipirinhas with various fruit juices as the base are the foundation of the drink menu, but five types of Cachasas will also be offered. Cachasa is a liquor made from fermented sugarcane and is similar in nature to rum, but largely unheard of or sold in the DC area. Quioco told me it has a “smokey, molasses flavor” which piqued my interest.

Not one to don my dancing shoes and head out on a Saturday night, I’m actually really excited for Tropicalia to open. It seems to be just what the neighborhood needs at the right time, off-beat drink offerings and music that won’t leave this 30-something feeling woefully uncool from the moment I walk in.

It’s a very unusual space, there’s no way around it. Puffy “clouds” (chandeliers) dot the sky above the plexiglass, lit bar, a psychedelic mural of a forest scene hangs prominently next to the front bar and some 60 hand-painted neon pink chairs drip with a rainbow motif.

Part of the Neighborhood

Aside from some questions about how the neighborhood, and DC at large, will receive a new place inspired by a mixture of art forms and music types, Quioco says, “Time will define what we really are.” Though he hopes the spot soon becomes a place where neighborhood folks can convene on quieter nights, enjoying good drinks and company.

After spending more than a decade in the 14th and U Street neighborhood, it’s an understatement to say that Quioco is deeply embedded in the fabric of the community. Quioco spent years as general manager of two 14th Street restaurant-bars.

“You have to stay responsible, and loyal to people in the neighborhood. You need to have employees who can interact with the public,” said Quioco. “Anyone who is successful in this city knows that they need to work with the neighborhoods and the city government… to reach out and be responsive to people’s concerns.”

Tropicalia is like nothing DC has experienced before, and I think that’s just what the city needs right now — something to shake us up a bit.

I want you to think for a minute about the best phrase ever recited upon entering a U Street nightclub (… and “Hello, gorgeous” does not count).

But how about “No cover?” Yeah, that is music to the ears.

This Sunday, DC Jazz Jam will host its free weekly session at Dahlak Restaurant (1771 U Street NW), featuring one of DC’s top performing and recording artists, Jeff Antoniuk. On Sunday, June 24, guests are invited to venture to the heart of the city’s historic jazz neighborhood, listen to local jazz musicians and enjoy the Eritrean food and drink at Dahlak.

From Michelle Lancaster. Tell me what I missed on Twitter @MichLancaster.

Ladies, be on the lookout. Washington Examiner is reporting that at least one woman was picked up in Dupont Circle and assaulted near 18th Street NE. Take a look at the picture, report any info you have and be careful when taking a cab home after your summer fun.

You know by now that I’m a big fan of drinking for charity. When the charity in question is 826DC, the local affiliate of Dave Egger’s creative writing foundation, the drinks in question are Lagunitas AND there’s music, you really have no excuse not to go. 826DC is dedicated to encouraging and promoting writing among local school-aged youth and is doing great work (check out what their support has done for one Ballou student). MonumentFest is tomorrow, June 2, at DC9 and you can get your slightly cheaper tickets in advance here ($15, $17 at the door).