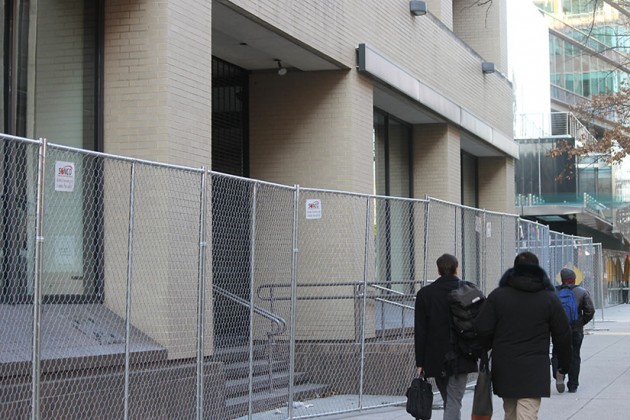 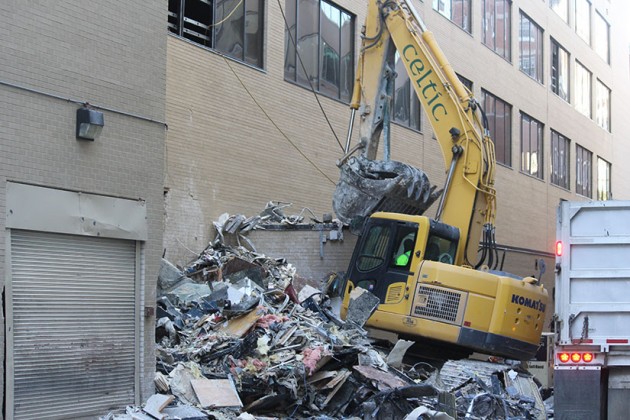 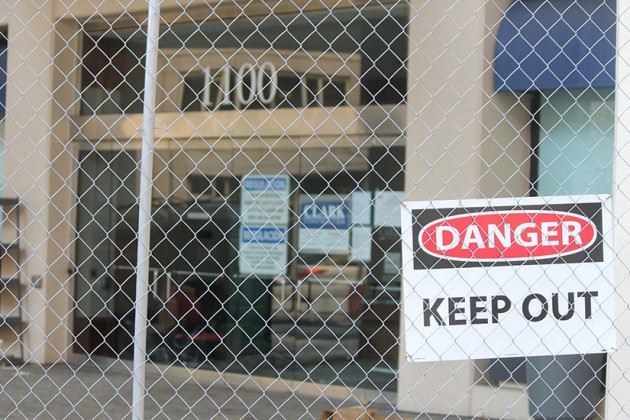 (Updated at 11:52 a.m.) Some residents are losing sleep over 24-hour permits issued for the demolition of the former Washington Post headquarters at 15th and L streets NW.

Representatives from the nearby Presidential Cooperative apartments, Capitol Hilton and the University Club said that noise from the demolition — slated to begin next Monday —  would disturb peace and quiet in the area, especially late at night and in the early morning.

The group last month sent letters of concern to the D.C. Department of Regulatory and Consumer Affairs (DCRA), said Mike Fasano, who represents the Presidential, at last night’s ANC 2B meeting at the Brookings Institution in Dupont Circle. END_OF_DOCUMENT_TOKEN_TO_BE_REPLACED 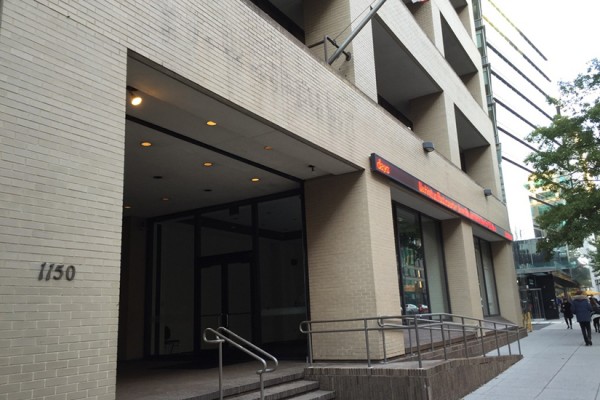 Workers were spotted removing the iconic Post sign at 1150 15th Street NW earlier this morning. All that remains is a ghostly outline of the company’s name.

Washingtonian broke the news yesterday that the old Post sign would come down today. The sign will be reinstalled on the fourth floor of the newspaper’s new headquarters at 1301 K St. NW when it opens next year.

Journalists gathered to say farewell — albeit temporarily — to the iconic sign by snapping selfies in front of it yesterday.

The @washingtonpost building move gets real tomorrow with the removal of the sign on 15th … https://t.co/N0QDR6uliz pic.twitter.com/JZYX0FZsRc

photo day on 15th St. Our sign comes down tomorrow; will be inside the new HQ @washingtonpost pic.twitter.com/DrwOIllIku

They're tearing the sign down in front of the @washingtonpost tomorrow so we snagged a photo real quick. pic.twitter.com/KXKYM0DAQy

… And now, I’m pleased to welcome our latest addition: Mike DeBonis, Washington Post reporter who covers local politics and government (DeBonis came from Washington City Paper.) DeBonis’ unbiased coverage of local politics and the inner-workings of the City Council over the past four years has earned him the reputation as the tough but fair reporter who leaves no stone unturned.

In addition to his day-to-day Post deadlines, DeBonis blogs on all things D.C. You can check out his breaking news and musings at District of DeBonis. As you’ll read below, DeBonis has strong ties to his current job, local journalism, the streets of Borderstan and the glory that is Fast Gourmet.

Profiles like DeBonis’ are part of our ongoing series featuring “Borderstan-grown” people of interest.  For others we have featured, check out interviews with featured personality Shi-Queeta-Lee and novelist Joe Flood.

Borderstan: Thanks for agreeing to be the one who answers the questions instead of asking them. Tell us about your move to D.C. — when did you arrive and what brought you here?

DeBonis: I will have lived in D.C. 11 years later this month. I moved here in 2000 to attend Georgetown University. At the time, I thought I was going to be big into politics. Then, I realized I didn’t really care for my fellow students who were also going big into politics. I ended up a Russian major, but mostly I worked on the weekly newspaper. I started freelancing for Washington City Paper while a student and when they offered me a job just before my last semester, I decided to graduate early and take it because it was the only thing I was qualified to do anyway.

END_OF_DOCUMENT_TOKEN_TO_BE_REPLACED

Follow Borderstan on Twitter for Dupont-Logan-U Street news? Love Alejandra Owens’ tweets on food and restaurants? Can you show us a little end-of-the-year ballot love?

The Washington Post is running a DC’s Top Tweeps 2010 competition. The nominees are out and we’d like to ask for your support. Thanks to you, Borderstan was nominated as Favorite DC-area Blogger and our food writer, Alejandra Owens, was nominated for Favorite Foodie.

Voting ends at 11:59 pm on Friday, December 31, so there’s no time to waste! Winners will be announced on Monday, January 3. You can follow the fun on Twitter, naturally, at #dctweeps.

END_OF_DOCUMENT_TOKEN_TO_BE_REPLACED

The changing neighborhoods east of the Anacostia River, where public housing has given way to new market-rate and subsidized homes, have been the source of more than half of the homicides in the District since the beginning of the year. Eleven of the 20 killings in the city since January were in communities like historic Anacostia and Congress Heights, places starting to reflect a mix of long-term residents and newcomers drawn to the new development. Last year at this time, there were seven in the area, the 7th Police District.

From today’s Washington Post: “Time to Prune, Groom and Clear The Way for Spring.”

You may be ready for spring, but is your garden? The final weeks of winter offer the last chance to clear away the remnants of last year’s garden before new growth sprouts.

An 18-year-old District resident was ordered held in city jail yesterday after being charged with second-degree murder in the slaying of another teenager last month.

Lafonte Lurie Carlton is not new to the legal system. City officials said he was found guilty of homicide three years ago and sent to the city’s Department of Youth Rehabilitation Services. His arrest last week highlights concerns among D.C. Superior Court judges who have been frustrated as they watch juveniles come to their courts after being released from the custody of Youth Rehabilitation Services. Judges, residents and police have said some offenders are released too soon.

Yes, life will return to normal in Borderstan and Washington. If you have decided to watch the Inauguration festivities on television/online–and avoid the crowds–you may be ready to get out and go some something by mid-week. Here are a few activities and events coming up later this week, January 21 and 22. Listing is from “D.C. Community Events” in The Washington Post’s weekly Extra section for D.C.

END_OF_DOCUMENT_TOKEN_TO_BE_REPLACED

The Washington Post’s Going Out Gurus are blogging Inauguration 2009 festivities. By the way, exactly who are the “Going Out Gurus?”

END_OF_DOCUMENT_TOKEN_TO_BE_REPLACED

Even in a year in which the homicide numbers barely budged, D.C. police and prosecutors see signs that don’t bode well for the future: an increase in younger killers, apt to open fire on crowded city streets, who could not care less about the damage they cause. Many young suspects put their heads down and even try to sleep during interrogations, according to D.C. homicide detectives. Others seem cold inside, with no sense of reality.