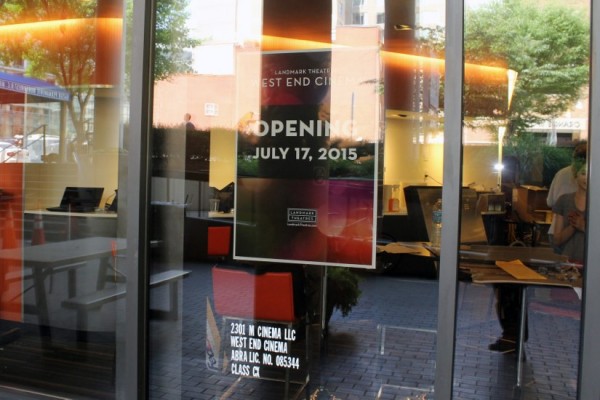 Landmark Theatres will reopen West End Cinema (2301 M St NW) later this month, according to a sign recently posted on the theater’s window.

New employees are currently being hired to prepare for a soft opening on July 17, an employee working at the former West End Cinema location said today.

Landmark Theatres is a national theater chain that owns the E Street Cinema downtown and the Bethesda Row Cinema in Bethesda.

In addition to West End, the theater chain also plans to open a new theater in the Atlantic Plumbing Project development on V Street NW on October 9, as reported by the Washington Business Journal in November.

Get Your Corned Beef While You Can

The Municipal Deli at the Reeves Center may not be around too much longer. Washington City Paper tells us that Fitwi “John” Tekeste, the owner is almost $350,000 behind in his rent payments — though Tekeste claims that there was a deal struck with the Williams administration for renovations he performed on the space, which stalled during Fenty’s tenure. The Department of Real Estate Services has had enough, and plans to force Tekeste out by Feburary 21. I’m sure this isn’t the last we’ll hear from Tekeste on this matter though.

END_OF_DOCUMENT_TOKEN_TO_BE_REPLACED

What You Need to Know: Sanity and Fear Weekend

In case you have been hiding from all forms of media, you know by now that Jon Stewart and Stephen Colbert of Comedy Central fame have arrived in D.C. in advance of their weekend rallies, “The Rally to Restore Sanity” and “March to Restore Fear” respectively. What do you need to know to survive the weekend? Here’s what Metro and driving will look like, thanks to DCist. Before you hit the bars, see where the crowd may head, based on the guide compiled by Brightest Young Things and plan accordingly.

Federal law enforcement officials made an arrest in a plot to bomb Metro stations Wednesday morning, raising new fears of possible terrorist targets in D.C. The arrest was the result of an undercover sting operation. Farooque Ahmed of Ashburn is alleged to have conspired with people he thought to be Al Qaeda operatives in casing stations for possible targets. Full story can be found at Washington Post

While we may not be getting Visions on Florida Ave. reopened anytime soon, we nonetheless applaud the effort to restore the always excellent combination of movies and booze. It’s at 2301 M St. and will offer a full bar and a range of movies. More information can be found at their site, Westendcinema.com.

Lions and Moats, Oh My!

Yeah, we’re borrowing shamelessly from every other news outlet in the city and ending our news roundup with fluff, in this case, lion fluff. You can make a tie in to Halloween, you can blame it on Stewart and Colbert sucking up all the ink but one thing is for sure – they are an adorable way to end your week. DCist has plenty of pictures.