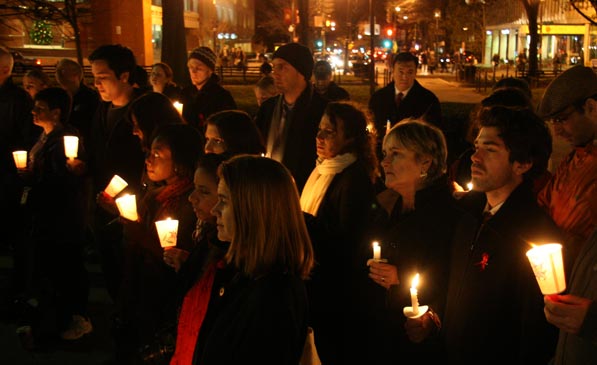 A crowd will gather inside Whitman-Walker’s new health center tonight to light candles and honor those lost to HIV and AIDS over the past 30 years.

The health organization will hold its annual candlelight vigil on the sixth floor of its health center at 1525 14th St. NW at 6 p.m.

The ceremony will begin with an introduction from Whitman-Walker Health’s director of community relations, Justin Goforth, and a song from a member of the Gay Men’s Chorus. After remarks from three Whitman-Walker patients, attendees will light candles, participate in an interfaith prayer and take a moment of silence.

Whitman-Walker in previous years held the vigil in Dupont Circle and at its Elizabeth Taylor Medical Center. This will be the first ceremony inside the organization’s new health center on 14th Street.

This Saturday, December 1, is World AIDS Day, an internationally recognized day that serves as an opportunity for people worldwide to unite in the fight against HIV, show support for people living with HIV and to commemorate people who have died.

At 5 pm on Saturday, Whitman-Walker Health will host its annual candlelight vigil in Dupont Circle. The clinic’s mobile testing unit will also be on-site to provide free HIV testing.

Just down the road, the Lincoln Congregational Temple will hold its candlelight vigil (also on Saturday, Dec. 1) at 7 pm on the front steps of the church, located at 1701 R Street NW.

Dito’s Christmas Tree is up in front of Floriana Restaurant and Dito’s Bar on 17th Street NW. (Luis Gomez Photos)

This news surprises no one, as the weekend’s violent melee at the “world-class restaurant” has continued to be the most discussed item in Dupont Circle. Washington Examiner reports that the Alcoholic Beverage Regulation Administration (ABRA) suspended Heritage India’s license, citing Heritage India’s inability to control the violence. Among items of concern was the restaurant’s deviation from their own security plan, lack of working surveillance cameras and failure to use metal detectors on the boisterous crowd assembled for an event billed as ‘Black Out’ Thanksgiving. No word on the restaurant’s plan to appeal or accept the suspension or their future operating plans.

Thursday marked World AIDS Day, and DC participated in the event in a number of important ways. The Wilson Building shown red to highlight the impact of AIDS in DC, a mobile van was outside offering testing for much of the day and a candlelight vigil was held in Dupont Circle. DCist has a full recap of other events, including two hearings on AIDS legislation and for non-city sponsored events, our story is here.

A few members came under scrutiny a while ago after reporters saw some documentation on how constituent service fund dollars were being spent (see: Jack Evans, The Washington Post). But things got quiet after a defense of the expenditures from Evans. Expect the issue to be back on at least the local news radar, after the Washington City Paper published an angry missive from Alan Suderman. There is a pretty long list of items purchased with those funds in his piece, and while it’s not damning, it’s none too pleasant to see in ink either.

From Mike Kohn. Got some news for Mike? Find him on Twitter @mike_kohn or drop him a line at[email protected].

In addition to the vigil, WWH will be offering free and confidential HIV testing on Dec. 1 at its Elizabeth Taylor Medical Center at 14th and R Streets NW between 9 am and 5 pm. The tests will also be offered from the mobile testing vehicle during the vigil.

On Wednesday, Nov. 30, Kimpton Hotels is hosting their annual “Red Hot Night in the Nation’s Capital” event to benefit WWH. The event is at Urbana Restaurant & Wine Bar, 2121 P Street NW, 6 to 8 pm; $10 donation at door.

Read more from the Washington Blade, including information on other DC events happening this week to commemorate World AIDS Day.

By the Numbers: HIV in DC

Dupont Circle was again the sight of Whitman-Walker Clinic’s annual candlelight vigil on World AIDS Day. About 100 people showed up to light candles, hear speakers, remember loved ones lost to AIDS and show support for people living with HIV. It was a moving ceremony that also reminds us that AIDS is still a threat to millions of people around the world — and it keeps spreading.

Dec. 2 deadline: The D.C. HIV Prevention Community Planning Group (HPCPG), is looking for new members. The HPCPG is an all-volunteer group that works with the D.C. government each year to create a prevention plan to stop the spread of HIV in the District. Download the fact sheet and application.

According to the Whitman-Walter Clinic, there are more than 15,000 people living with AIDS in the Washington metropolitan area and tens of thousands more are estimated to be infected with the HIV virus. WWC is located at 14th and R St. NW.

Wednesday is World AIDS Day and the 2010 theme is “Building on Success.” World AIDS Day is celebrated each year on Dec. 1 around the world. It has become one of the most recognized international health days as well as a key opportunity to raise awareness, commemorate those who have passed on, and celebrate victories such as increased access to treatment and prevention services.

Dec. 2 deadline: The D.C. HIV Prevention Community Planning Group (HPCPG), is looking for new members. The HPCPG is an all-volunteer group that works with the D.C. government each year to create a prevention plan to stop the spread of HIV in the District. Download the fact sheet and application.

According to the Whitman-Walter Clinic, there are more than 15,000 people living with AIDS in the Washington metropolitan area and tens of thousands more are estimated to be infected with the HIV virus.